In urban or in low density areas with recent dwellings, the customer connection to the ultrafast broadband network is performed in an underground network configuration. More aesthetic and less subject to the risk of tearing or crushing than overhead lines, underground telecommunications installations are preferred by subscribers. However, underground deployment presents as well certain constraints. The risk of flooding, humidity, sheath damage by rodents or cable pulling into occupied ducts are some of the challenges that telecom installers may experience. Choosing the right cable for running an underground FTTH installation is therefore a key step in the course of the project.

Whatever the architecture of your network, as soon as an optical cable is foreseen for an installation in underground configuration, even when ran on short distances, it is important to rapidly check if the considered cable is built with swelling elements. Thus, for instance, in case of flooding of the telecommunications manhole, these swelling yarns prevent the penetration of humidity if the cable sheath were to be damaged. Afterwards, the choice between an optical cable and another needs to be made by analyzing the configuration of your network and the associated constraints. To guide you in conducting your underground roll-out projects, we suggest you the following analysis centered on 3 case studies:

By tracing the cable route, we will be able to better understand the constraints to which it will be subject to, assess the risks and in the end, make an informed choice so to guarantee reliable and durable telecommunications networks. 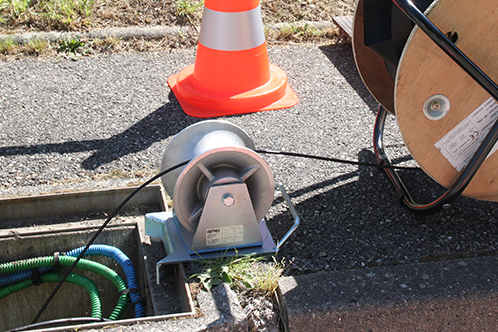 1. Underground installation exclusively: which fibre optic cable to use?

In urban and suburban areas, buildings with more than 8 dwellings are generally concerned by the underground FTTH deployment. New Single Dwelling Units (SDU) in residential areas are also the target of this type of roll-out. Indeed, for the construction of recent homes, the supply of telecommunications lines has been planned to be provided via underground ducts and tubing.

Thus, in urban areas, the subscriber connection to the very high speed networks is performed starting from a manhole situated in the public space (under a sidewalk, a roadway or a park). The optical cable is ran into a split corrugated tubing all the way to the building’s entry point or, in some cases, up to the customer’s premises is the cable is a multi-applications drop such as Droptic® LM3 or LM4.

For performing FTTH connections into recent buildings, the optical signal can be routed in the room where the optical telecommunications outlet has been installed thanks to an optical cable linked to a Optical Telecommunications Outlet such as the Eline® DTIo, usually installed inside a residential communication gateway. Then, from this OTO, the telecom manhole optical cable can be routed into a duct or tubing communicating with a Demarcation Point (DP or DPO). This DPO can be located in a manhole placed at the limit of the subscriber’s property. Depending on its construction, the same underground drop cable can be used to link via ducts and tubing the manhole on the subscriber’s property to another manhole placed on the public space and so on until getting to the telecom operator’s manhole. It is advisable to check at this point is the duct or tubing to use is already encumbered in order to determine the maximum allowable diameter for the cable to be installed. Another aspect to think about is the compatibility between the cable’s construction and the distance to be covered. Drop cables such as Droptic® LM4 and LM3 are engineered for installation in duct over several hundred meters, while optical drops such as LM2 or LM8 are only compatible with roll-outs on short distances, up to 50 meters.

Among FTTH underground installations, we can also observe that fiber deployments are also carried by using buried optical cables (MC). This technique is more restrictive, as the cable is subject to the risk of tearing if construction sites were to occur on the subscriber’s property or at the subdivision level. Also, when a buried cable is damaged, trenches must be recreated in order to install a new cable. Thus, FTTH deployments using underground optical cables installed into ducts are more convenient. Indeed, this technique provides a longer lifespan to the cable, as it is better protected against the environment, abrasion, etc.

2. Aerial-underground installation: which fibre optic cable to use ?

The aerial-underground configuration may be implemented when a street is equipped with fiber on only one side in overhead layout and the subscriber is located on the other side of the street but has an available underground infrastructure, extended to the property line. In this particular case, while subscribers located on the side of the overhead line will be connected via an aerial-façade configuration, the optical signal will be routed in an aerial-underground configuration for the other ones. Thus, from the pole situated in the vicinity of the house to be connected, a cable down-lead will be installed so to further route the same cable into ducts and tubing up to the subscriber’s place.

Despite the apparent complexity of the jobsite, this type of FTTH project can be successfully realized with a single cable part number. Thus, for distances superior to 50 meters in underground layout, Droptic® LM4 and LM3 cables are the best choices, while for short distances, inferior to 50 meters, you may choose between the LM2BK and LM8BK drop cables.

The choice between LM4 and LM3 depends on the requested cable diameter. The sorting between LM2BK and LM8BK depends on the use you want to make of this cable. Thus, while the LM2BK is engineered with a single module for different capacities (1FO, 2FO and 4FO), the LM8BK is built with two fiber optic strands in two separate modules, enabling thus an independent fiber management.

To simplify the management of references, reduce the expenses related to splicing applications performed by long trained technicians and minimise in the same time the risk of signal loss or overburding the optical budget due to poorly performed splices, multi-application cables are the best solution for this type of configuration.

Thus, first few meters of optical cable deployed on a facade will be protected by a cable down lead protective cover.Then, inside the DTIo optical telecommunications outlet, the telecom technician will remove the outer sheath of the LM4 drop cable within a couple of seconds in order to further route only a Droptic® LM1L LSZH FR cable inside the customer's premises. This indoor drop has been developed to perfectly fit the installation environment, as it takes the shape of window and door frames and runs discreetly alongside baseboards. In the case of a LM3 drop cable, the installation can also be performed without interruption. The only main difference between these two FTTH cables consist in the size of the outer diameter and the model of inner cable. Thus, while the LM4 is developped with a 5mm outer diameter and offers a LM1L Ø 2.8mm indoor cable, the LM3 presents a 6mm outer diameter and a LM1 Ø 3.3mm indoor cable. The choice bvetween these two cabling solutions can be made depending on the different constraints observed in terms of the bending radius to be respected, the available space for installation into a cable duct, etc.

3. Underground-facade installation: which fibre optic cable to use ?

In this type of network configuration, an optical drop cable is ran in underground layout, from a Fiber Concentration Point (FCP) or a fiber splicing closure up to a telecom manhole located at a building entry’s or at the premises’ line. As the existing infrastructure does not allow the cable to continue its way in underground configuration, this drop can be fusion spliced with another optical cable compatible with installation on facade (respect of bending radius, UV resistance, etc.) or deployed without discontinuity on facade and indoor it was built for multiple applications (in duct, façade, indoor) such as the LM4 or the LM3.

To simplify the management of the part numbers, cut off the costs related to interventions of technicians specialized in fusion splicing on field and at the same time, the risk of reducing the optical budget with poorly performed splices, multi-application FTTH cables are the best drop cabling solution for this type of network configuration.

Thus, the first few meters of drop cable on facade will be protected by a compatible cable cover. Then, inside the Optical Telecommunications Outlet used as an outdoor-indoor transition point, the telecom technician will strip off the LM4 outer sheath in a couple of seconds so to access a LSZH-FR LM1L indoor cable that he will install inside the premises, alongside doors, windows or baseboards. When using a LM3 drop cable, installation can also be performed uninterruptedly. The only two major differences between these two FTTH drop cabling solutions: the size of their outer diameter and the type of the contained indoor cable. Thus, while the LM4 is developed with an outer diameter of 4mm and offers a LM1L indoor cable (Ø 2.8mm), the LM3 is engineered with an outer diameter of 6mm and includes a LM1 drop cable (Ø 3.3mm). The choice between these two multi-application drops is to be made by considering the constraints observed in terms of bending radius, available space for an installation in a cable raceway, etc.