The fibre optic rollout in UK is organised following considerably the same rules as the FTTH deployment in other European countries such as France for example, with a clear distinction between urban and rural areas, also known as high density areas and low-density areas.

In UK, Building Digital UK (BDUK), part of the Department for Digital, Culture, Media & Sport (DCMS) is responsible for giving access to fast and reliable digital infrastructures to every business and home. To deploy Full Fibre networks throughout UK, Openreach has committed to DCMS to regularly publish an update of the locations where FTTP rollouts were, are currently or will be performed. These locations are chosen according to Fibre First Towns, Cities and Boroughs and Market Towns and Villages Build Programmes. Of course, the priority goes to those locations where is considered economically viable to deploy fibre optic network infrastructures close to premises.

In case of urban areas, considered high density areas, the relevance of the FTTP rollouts is obvious, whilst in rural areas, also known as low density areas, a Shared Rural Network (SRN) is implemented by four mobile operators who joined forced to significantly eliminate « total not-spots » areas. Their target is to provide at least coverage from one operator in these not-spot areas by mid 2024. For these rural and remote UK areas, the physical network infrastructure is thus far away from the subscribers’ premises. For more details, see our articles on fibre optic rollouts, in high density areas or low density areas. 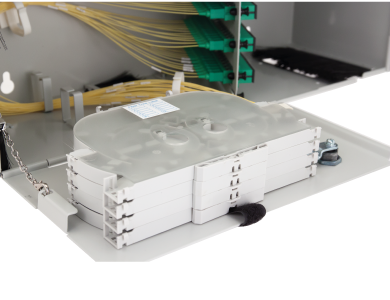 Fibre optic rollout to the premises is performed according to different stages and requires the use of various fibre optic boxes. The Fibre-to-the-Home or Fibre-to-the Premises starts at the Street Cabinet’s level. This Fibre Distribution Hub is a concentration point between the fibre optic local loops of different operators and the optical network, common to all operators and used to serve all the identified premises. This is where the network is shared, so all operators can deploy their networks. Depending on the network configuration, The Fibre Distribution Hub can be located in various different places: 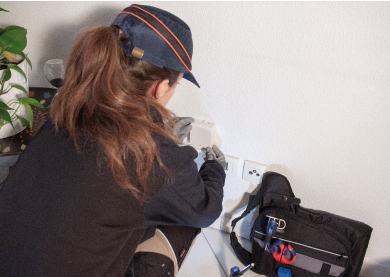 The fibre optic rollout requires then the installation of an Optical Distribution Point (ODP) that will be used to enable a horizontal or vertical deployment, according to the network infrastructure to be rolled out. The ODP is the optical box to which the optical sockets will be linked in order to enable access to the very high-speed services. Vertical rollout is performed in buildings with several dwellings or businesses where a riser cable infrastructure is implemented as an interconnection point between the building’s vertical network and the drop cable used to enable the subscriber optical connection. Horizontal rollout is specific for fibre optic deployments performed at the street’s level. The optical distribution point is therefore located outside the premises, in the immediate vicinity of the dwelling, generally at a few meters of the premises. In this scenario, the Optical Distribution Point will be pole or wall-mounted. To complete the access to the very high-speed broadband networks, the next step is to enable the end connection and bring the optical signal up to the subscriber’s premises. This will be completed by the operator with which the end-user has decided to subscribe an offer. The operator is responsible thus to carry out this operation consisting into installing a drop cable containing one or various fibre optics between the Optical Distribution Point and the subscriber’s optical outlet. This optical terminal box is the passive equipment to which the >subscriber connects the operator’s box.